Me and a friend, KyoKusagani1996, are going to use Fightcade to go through all of the noteworthy Co-Op Beat Em Ups in Chronological order, most of which I've never played before. This page is to document my experiences with them. 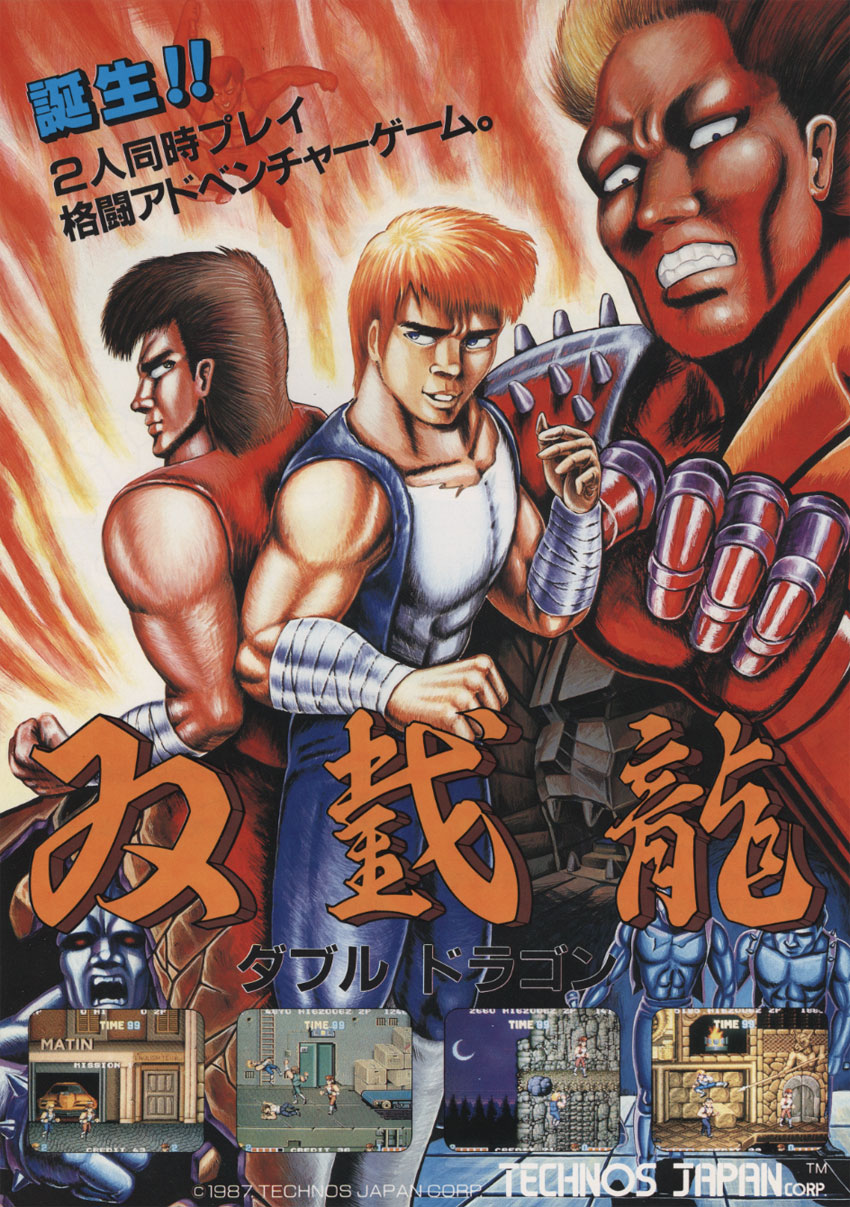 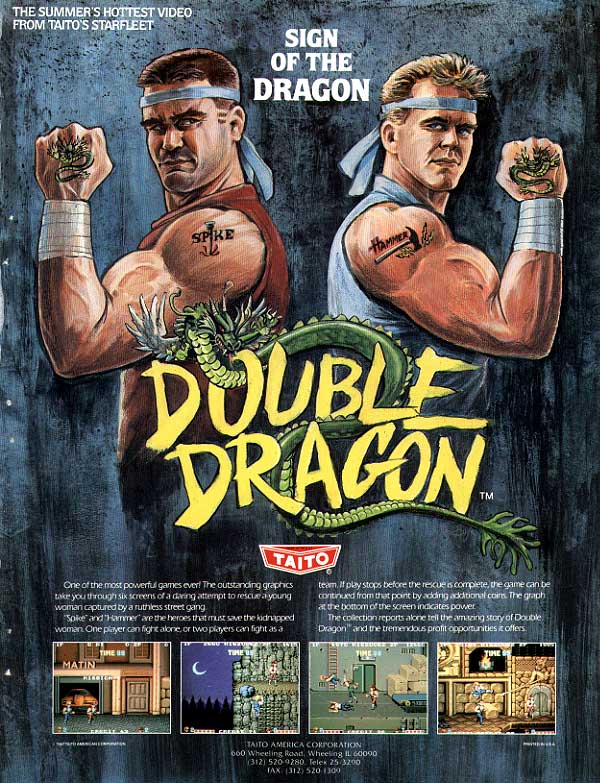 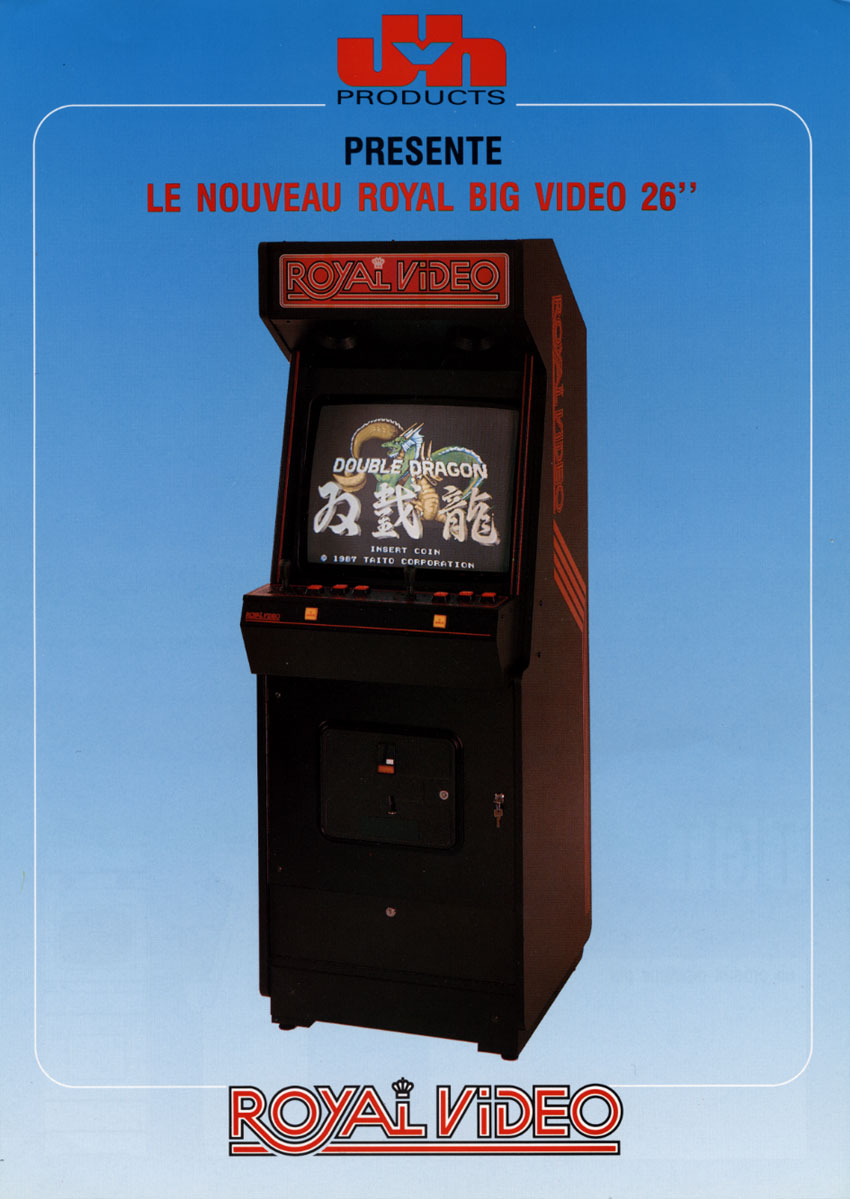 Of course, we start off with the grandaddy of co-op beat em ups: Double Dragon. I keep hearing about this game from game reviewers older than me, particularly the NES version, because the Internet is dominated by Ameircans.

First impression were... eh. It didn't seem to age too well, you can easily beat up opponents without them getting a hit on you, and I wasn't a huge fan of most of the music, especially coming through my awful cheap headphones!

However, the more I played it, the more I enjoyed it, I really got into it by the end. Kyo 1CCed it, and I went through like 5 credits!

The game kept slowing down, which is accurate to the game. I knew about this in advance, since I heard it somewhere before, but it slowed down for most of the game, to the point I struggled when it ran full speed!

In the end, we had to fight each-other, again, something I knew in advance, and Kyo thrashed me! I didn't get a single hit!

I really enjoyed going through this game, and I wanted to do more, so we're going to through a beat em up history, which is what led to this page being made! See you next game! 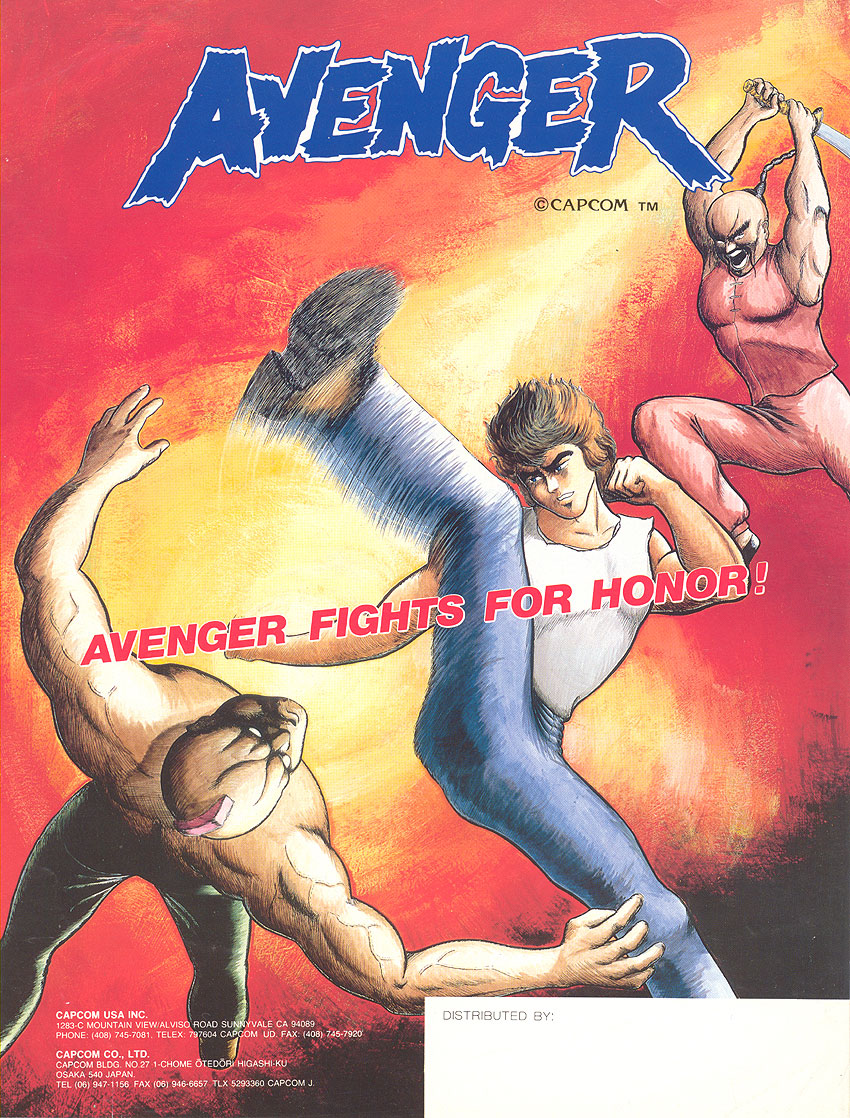 So this game took an unexpeced direction. Instead of being a sicescroller or isometric, like most beat em ups, Avengers, not to be confused with Marvel's Avengers, has a top-down view.

We literally just spammed the kick button the whole time, and we kept killing enemies without getting hit much. It was mindless, but the good kind of mindless. The bosses were also much easier. We even discovered a new strat for a boss in a forest level, who whips out a snake (not that kind, pervert!) to hit you with.

The avengers are a straight bunch. They can survive having knives thrown at them as if nothing hit them and can literally kick out fires, yet can't swim and drown in literal puddles... ¯\_(ツ)_/¯

You were collecting women(?) throughout the game, each level completed gave you a woman, to share between youse? Yeah, that hasn't aged well. 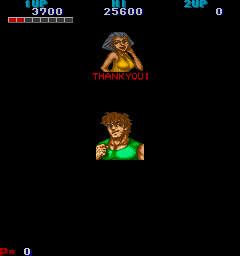 The game offers a lot of variety when it comes to level designs, you go through villages, forests, and castles, among others! It doesn't really get boring or repetitive.

Overall, pretty fun, and I can imagine it being fun in short bursts

So this game isn't so much a sequel as it is an upgrade to the original. The structure and story is near identical to the original, with small changes, such as you starting off on a rooftop instead of on the streets, and your girlfriend is outright murdered!

The game plays a lot like the original, but with less slowdown, and a new control scheme, well, not new, but it's different from the original
They brought back the control scheme from Renegade, which they made before Double Dragon, where you have a left attack, a right attack button and a jump button. You can do a spinning air kick if you press jump with an attack at the right time.

In the end, you get revenge for your girlfriend, but you end up fighting your inner selves to move on from your girlfriend's death. These people are very difficult to beat, we wasted a lot of theoretical credits trying to beat them!

When/if you do beat them, you get shown a photo of you guys with the girlfriend, which is supposed to be the last photos taken of her, and is a way to mourn and remember here

Kind of deep, right? Well, the game doesn't make any of this clear. There are no texts, and your "inner selves" just appear out of nowhere. Many people even today don't know about this.

Overall, it's much more enjoyable than the original, if only because of the improved framerates

Next up, we're going to play the NES port.

We decided to try out Double Dragon 2 for the NES, which is a completely different game. Instead of upgrading Double Dragon II, like the arcade game, they went with a totally original game that switched between 2D plane fighting to a 2D platformer. There is plenty of variety in this game.

Good game, but hard as hell.

So it turns out Golden Axe had an arcade version, who knew?

The game was a lot of fun. You got to choose between 3 characters: Ax Battler, a sword wielding barbarian, Tyris Flare, a longsword wielding Amazon and Gillus Thunderhead, an axe wielding dwarf. I always went as the Gillus whereas Kyo played Ax the first time around, and Tyris the second time.

As you might have guessed, we played through the game twice, it was that fun!

So in this game, you get normal attacks, and magic to use, and how good you are at either depend on which character you are. Gillus was good at combat, whereas Tyris was better at magic, and Ax was inbetween.

Throughout the game, you get to fight humans, dragons, giants and skeletons. You even got to mount the dragons when you defeat the enemies riding them! Some of them even breathe fire!

You also have little thieves you can batter then for health and elixir for magic. The little shits also steal from you between levels!

Speak of between levels, you are shown a map showing your progress in a style appropriate to the era the game takes place. It has nice music, too!

At the end of the game, you get an interesting ending which I won't spoil here, and a rank telling you how you did, based on how much health and how many lives you lost. I was about D or E whereas Kyo reached B.

Overall, a very enjoyable game. I'll be on the lookout for the Mega Drive version now!

Originally going to be a Street Fighter sequel called Street Fighter '89, Final Fight completely revolutionised Beat 'Em Ups, and they became how people like me know them today.

The story goes that the Mayor's daughter got kidnapped, and she needs to be saved. Usual stuff, but the Mayuor, being the absolute CHAD he is, joins Guy and Cody to batter people to get her back, and he's RIPPED! He can take on anyone!

I honestly had a blast playing this! I played as The Mayor, whose name is Haggard, but eventually went with Guy because him and Cody can do an unintended infinite where you bunch twice, punch away and then back to the target, and you can do this indefinitely if timed right.

The game had plenty of variety in enemies and environments, looked great given when it came out and is very technically impressive. They can have 18 characters on screen before slowing down.

It's all very well done, and it's little wonder it took off the way it did. Looking forward to playing Beat Em Ups after this!